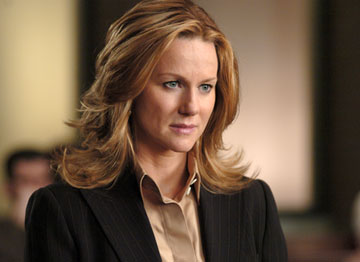 In the new film The Life of David Gale, opening Friday in Bay Area theaters, Laura Linney plays a dead woman. She's seen walking and talking only in flashbacks.

What's more, we witness her actual death scene, a harrowing demise involving a plastic bag tied around her neck.

Maybe someday with newer and fancier digital technology, this scene could be faked, but Linney went through it for real.

"It was a hard day," she said during a recent San Francisco visit. "I had a signal I could make with my foot if I got into trouble. Then they would call cut and someone would rush in and tear the bag off."

Aside from her unfortunate headwear, Linney's character Constance Hallaway already has a tough life. She has devoted her entire being to fighting the death penalty in Texas, even to the detriment of her emotional and physical health.

Her death supposedly comes at the hands of the title character (Kevin Spacey), a friend and fellow activist, who gets sentenced to the chair for rape and murder.

A third character, reporter Bitsey Bloom (Kate Winslet), enters the proceedings to try and sort out the truth.

Despite appearing opposite these two flashier parts, Constance emerges as the film's most interesting character and Linney rises to the challenge with its richest performance.

This should not be a shock to Linney's fans, who rallied around her 2000 indie film You Can Count on Me, making it a hit and earning Linney an Oscar nomination for Best Actress.

The beautiful, tough actress has emerged slowly and deliberately over the years. Her father, playwright Romulus Linney as well as her mother mostly supported her decision to work in theater.

"They didn't encourage me, nor did they discourage me. I'm sure they were terrified, as they should have been," she says.

Trained at Julliard, Linney was originally convinced that she would do nothing but theater. She started working as a techie, but gradually made her way onstage. She became enchanted with the theater world, though at the same time her agent began to get her small roles in movies like Lorenzo's Oil and Searching for Bobby Fischer.

"It wasn't that I was snobby toward film and television," Linney says. "I was terrified by it. I didn't understand it and I was intimidated. The whole 'be smaller' thing was not what I should have heard, because I got too small. I was afraid to do anything. And that's just not right. It's more about how you're connecting with your other actors; it's more intimate."

The big turning point for her film and television career came in the San Francisco-based mini-series "Tales of the City." "It was the first time I was on something from beginning to end, and I loved it," she says.

That led to a role in Primal Fear, the Richard Gere courtroom drama in which Edward Norton made his debut. Clint Eastwood saw her in that film, and cast her in Absolute Power.

"I had to really earn the Primal Fear role," Linney says. "And then for someone to turn around and give me something, it was a shock."

But her career kept growing. Her next film was the critically acclaimed 1998 box office smash The Truman Show, playing Jim Carrey's television wife. And that led to Terrence Davies' celebrated The House of Mirth, You Can Count on Me and working with Richard Gere again in The Mothman Prophecies. Eastwood has even invited her back for his upcoming Mystic River.

The 39 year-old actress continues to work in the theater as well, having recently completed runs of Honour, Uncle Vanya and The Crucible.

For The Life of David Gale, Linney found herself immersed in a world of violence -- not just in the bag scene, but also the world of death penalty justice in Texas. "There was a lot I didn't know. These issues are much deeper than people think they are. I realized how wildly uneducated I was on this issue, and then I started thinking about all the other issues I'm really uneducated about as well. We think we know so much, but we really don't."

Linney insists that, as a person, she did not necessarily need to believe in the film's issues in order to make the movie. "That's being an actor," she says. "For me, it's usually just the role, and the people I'm working with -- of course I would never do anything like making a propaganda piece for the KKK."

She does admit that most artistic people tend to lean toward liberal viewpoints.

"We're dealing with human emotions that most people don't deal with on a daily basis. And what we learn kind of leads us in that direction. It takes an open mind to be artistic. You have to be open to all of it. Our job is to understand every opinion, every point of view."

As a fiercely intelligent and dedicated actress, Linney has accomplished just that. But even as her roles get bigger and more intricate, she's not ready to relax and skate through. The acting business is just not that easy.

"It's never easy," she says. "The best part of the business it that you have to relish the fact that it's not."